You’ve probably already been here  as I’m never the earliest anywhere except the zoo, museums, playgrounds and places in which excessive queuing is involved. But here is an excerpt anyway and you can listen to the whole interview with Jonah Lehrer and read bits from his book.

I love these particular bits from the article:

“The original design for the Pixar studios consisted of three separate buildings, where they’d put the computer scientists in one building, and the animators in a second building and the third building would contain everybody else: the directors, the editors and so on. Steve realized that that was a terrible idea; that the real challenge of Pixar was getting people from these different cultures — these computer scientists and these cartoonists — to work together, to really collaborate. And so he insisted that Pixar studios just be one vast, cavernous space.”

“[Jobs] insisted there be only two bathrooms in the entire Pixar studios, and that these would be in the central space. And of course this is very inconvenient. No one wants to have to walk 15 minutes to go to the bathroom. And yet Steve insisted that this is the one place everyone has to go every day. And now you can talk to people at Pixar and they all have their ‘bathroom story.’ They all talk about the great conversation they had while washing their hands.

” … He wanted there to be mixing. He knew that the human friction makes the sparks, and that when you’re talking about a creative endeavor that requires people from different cultures to come together, you have to force them to mix; that our natural tendency is to stay isolated, to talk to people who are just like us, who speak our private languages, who understand our problems. But that’s a big mistake. And so his design was to force people to come together even if it was just going to be in the bathroom.”

The bathroom! Right on! And this bit, too:

On why you should stop trying to harness your brain, and instead help your brain get out of its harness

“The question becomes, what happens if you hit the wall? Because we’ve all got experience with this. You’re working on a creative problem, and then all of a sudden that feeling of progress disappears … What you should do then — when you hit the wall — is get away from your desk. Step away from the office. Take a long walk. Daydream. Find some way to relax. Get those alpha waves. Alpha waves are a signal in the brain that’s closely correlated with states of relaxation. And what scientists have found is that when people are relaxed, they’re much more likely to have those big ‘A ha!’ moments, those moments of insight where these seemingly impossible problems get solved. So when you hit the wall, the best thing you can do is probably take a very long, warm shower. The answer will only arrive once you stop looking for it.”

Showers! I’m telling you! I’ve lived it! Er, live it. This newsflash is now over. Goodnight and have a playground tomorrow. I mean p l e a s a n t tomorrow. One that brings you one day closer to the opening of The Hunger Games movie. Or at least one containing peanut butter and jelly sandwiches. Flaxseed peanut butter. Organic raspberry jelly. Homemade bread w/secret ingredients, including carrot puree, wheatgerm and super-finely-grated zucchini. 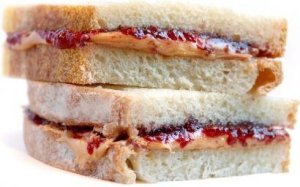 White bread??? Come on over and have mine.

Don’t tell me, my husband insists when I present him with family food-time. I like it, he says. So DO NOT TELL ME what’s in it. Just–let me keep liking it.

Words do not escape you Cancel reply