Tipping between lost and grateful;
never traveling with grace or without sound
doubt; raking up luck-bits when the world
sleeps in its stifling old box; kissing
the future into strum; hunkering
down, more, down to a pebble’s
dropped-star appeal, to strokable; keep-
ing up; keeping all life from peril. World
without end: the whispered lullaby,
half-believed—each 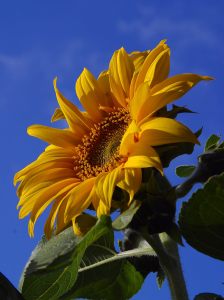 There’s a Starbucks over in Woodland Hills with a veranda. It’s southern plantation-ish in length with a pretty white rail bracing it. At least I think it’s a pretty white rail—that’s what my eyes insist to memory. It might actually be a black rail, but black isn’t very Tara-ish. Or perhaps I’m color blind. Synapse-starved. Over-caffeinated. Could be.

I held the door open for an elderly gentleman leaving this Tara Starbucks as I entered. He was so focused on balancing the 5 drinks in the carry-out carton that he didn’t look at me or smile, but nodded, his white hat rising and falling in slow motion. “Urgh,” he said.

At least I think his hat was white.

No elephants in this Starbucks, but the NaMeSitDifStarDaiWri (expletive) Po point is not to write about the Starbucks itself, but the poem hatched (or ground) in the Starbucks, or on the sweeping verandas of some Starbucks or beneath the dim hanging lights of any Starbucks, anywhere.

I smelled like the stuff sprayed on horses to keep flies off. I smelled like an old dressage saddle. I forgot to bring a change of shoes, my riding boots coated in Chatsworth dust, my cheeks cherry-red from finally attempting a canter around the ring. Embarrassed, I kept my sunglasses on. “Hm?” I was asked by the youngster behind the counter. “What, Ma’am? Frappucino or Americano? What do you want?” Ma’am, I thought. I am a Ma’am. Nope. There’s no poem in that.

Perhaps it was the frilly coffee drink, or perhaps I was high on fly spray, or perhaps it was the generous space between tables on the gargantuan Starbucks veranda that made me want to write something, anything that would give me something, anything to work with (suture, slice up, fatten, deconstruct) at some nebulous point in the future between PreK and karate and sports-in-the-park and my own fumbling riding lessons. So I pushed for something, even after dropping the pen three times and chasing it for many days down that exceptionally lengthy veranda.

What is it they say? Anything is possible.

Words do not escape you Cancel reply